The following is a guest contributed post from Amy Groden, Vice President of Marketing at Alpha Software. Read the business or technology press, and you’d assume that all was clear sailing in the mobile world. From small companies to world-spanning behemoths, the press reports these companies are gaining new business, getting closer to their customers, …   Read More

The following is a guest contributed post from Amy Groden, Vice President of Marketing at Alpha Software.

Read the business or technology press, and you’d assume that all was clear sailing in the mobile world. From small companies to world-spanning behemoths, the press reports these companies are gaining new business, getting closer to their customers, and improving their own efficiency and productivity with a myriad of new mobile business apps.

Well, yes and no. Companies are certainly doing all that. But there are clear indicators that companies are encountering significant roadblocks from getting wider business benefits from mobile. For example, Forrester, Gartner[1] and IDC all recently released data indicating that companies are having difficulty developing more than a handful of mobile business apps, yet the data also forecasts dramatic growth in the number of mobile apps in these organizations.

Warnings about Mobile App Demand from Gartner, Forrester and IDC

A recent report by Forrester, “The State of Mobile App Development,” lays out a variety of issues that bedevil enterprise app development efforts today. For a start, the report warns, “eBusiness pros have more irons in the fire than they can manage.” Many businesses have discovered that rolling out a new app only increases users’ expectations that the app will be improved, and fuels their hunger for new and better apps. That puts pressure on organizations’ already-tapped development teams.

Gartner and IDC validate these claims. A 2014 Gartner survey[2] on mobile app development stated that the majority of organizations have developed and released fewer than 10 apps, with a significant number of respondents not having released any mobile apps at all. Gartner[3] predicts 20 million apps will be built by 2018, yet also insists that development is currently unable to manage that workload. That same report sees the backlog only getting worse, however, indicating that “the market demand for mobile app development services will grow at least five times faster than internal IT organization capacity to deliver them.”

“This is an indication of the nascent state of mobility in most organizations, with many organizations questioning how to start app development in terms of tools, vendors, architectures or platforms, let alone being able to scale up to releasing 100 apps or more,” wrote Gartner Principal Research Analyst Adrian Leow in a June Gartner press release.

The result? More apps and development work than companies can handle. Organizations simply don’t have enough developer talent on staff, and are too heavily dependent on hiring outside resources to build and update these apps.

So what’s holding mobile back? The most-cited problem in the IDC survey was security and compliance issues, with 47 percent of companies saying it was a problem for them. That is followed by problems linking mobile platforms to existing databases, cited by 42 percent, and that mobile development took longer to deploy than was anticipated, cited by 41 percent. You can see the full survey results, below. 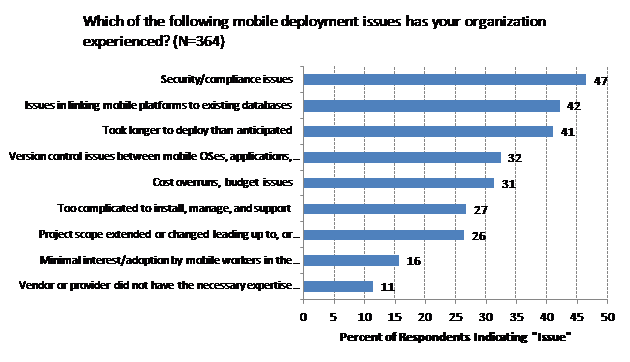 *In addition to the issues IDC indicates above, another issue that enterprises are bringing up in conversations surrounds the ability to build mobile apps that work offline. Productivity in all locations and conditions is paramount employee productivity and successful adoption of a business app.

How To Break Free

To overcome these hurdles, organizations are outsourcing the work or hiring more programmers. But, hiring or training a slew of new workers – especially those not familiar with your policies and processes – isn’t cost-efficient, won’t allow you to efficiently scale and isn’t fast enough to meet urgent demand across business lines.

Low-code, RMAD tools are very different from other mobile app development tools. While no-code tools may allow business users to build web apps, they do not allow developers to easily add-in critical enterprise capabilities – like offline synchronization or authentication into those apps. A low-code RMAD platform allows business owners at small firms, or line of business staff at larger organizations, the ability to create much of the app themselves, without having to involving IT. Offline, security, user experience and data integration are all built-in; however, should IT need to go in and customize the last 5-10 percent of the app to incorporate business rules or security policy, they can easily add code at any time.

Low-code RMAD tools can drive your app development times down by enabling a wider range of employees to take business processes mobile, without having to compromise security, integration or powerful mobile features. These tools offer the added bonus of making it easy to update apps and constantly improve the quality and features of deployed apps, so they’re widely adopted by the targeted user base.

Low-code RMAD tools will allow you to jump the hurdles outlined by Gartner, Forrester and IDC. The result is a method to quickly produce high-quality business applications that run on any device, can be updated easily, and without the added expense of new staff or high-priced development firms. Those organizations adopting low-code RMAD tools will be bucking the trends that are plaguing many of today’s companies.