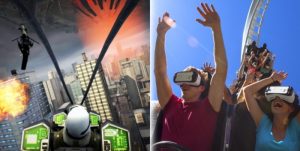 In partnership with Samsung, Six Flags is taking its signature brand of thrills to the next level and beyond in fully immersive, virtual riding experiences using Samsung Gear VR.

“This remarkable technology is a definite game-changer for theme park rides and represents everything our brand stands for—delivering the most thrilling and innovative rides and attractions in the world,” says John Duffey, Six Flags CEO. “With the addition of these virtual reality coasters, Six Flags will be introducing more than double the number of new coasters and rides than we did in 2015, and more than any year in the last decade. Innovation is part of our DNA, and news in every park every year is driving higher guest satisfaction and building strong momentum for our company.”