The following is a guest contributed post from Dave Bell, the Co-Founder and Chief Executive Officer of Gummicube. Mobile app marketplaces have grown tremendously since the introduction of smartphones to the general public, and by far the two largest are Apple’s App Store and Google’s Play Store. There are currently more than 2.2 million apps …   Read More

The following is a guest contributed post from Dave Bell, the Co-Founder and Chief Executive Officer of Gummicube.

Mobile app marketplaces have grown tremendously since the introduction of smartphones to the general public, and by far the two largest are Apple’s App Store and Google’s Play Store. There are currently more than 2.2 million apps in the App Store, and over 1.9 million in the Google Play Store.

However, of those apps, very few pull the types of numbers that can foster sustainable growth. As of January 2016, less than 1% of apps can be considered financially profitable, even though to date Apple has paid out nearly $40 billion to app developers.

With so much competition on each storefront, how can your app get noticed above the rest? If we focus on organic discovery, we already understand that when users search for a keyword, a list of apps is displayed. To get your app noticed, it needs to stand out from competitors in search results, and needs to do so in a positive way that will make users click ‘Install’.

Many app developers already know how important creative optimization is. Your app has to have an attractive icon, compelling screenshots and an engaging video to pull in users. What fewer developers realize, though, is how different the two app marketplaces can be when it comes to presentation of your creative elements.

To illustrate, let’s take a look at a common search term in both app stores: Matching Games. 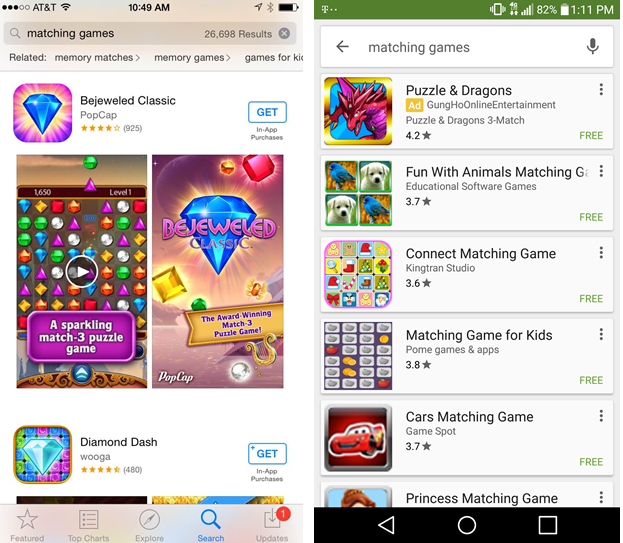 Even though the same search query was entered, the ways that apps are displayed and merchandised are drastically different.

Apple’s search result listings give an app much more breathing room; screenshots and video (if applicable) appear directly in the search results, and are placed prominently at center screen. The app’s icon and title are displayed at the top, with publisher and user rating filed neatly underneath. The “Get” button sits to the right, letting a user immediately download an app without even looking at the rest of its screenshots, its description or its reviews.

Because all of the necessary information is presented in the store listing on Apple products, if a user likes your video, first screenshot and icon enough, they can download the app straightaway. This is the most important distinction between iOS and Google Play creative optimization; it encourages users to “go with their gut” and download apps based on their first impression. This in turn puts the impetus on developers to make their icon, video and first screenshot as appealing as possible. According to BlueGlass, “these screenshots should be well-designed images which contain a screenshot of the app’s content along with the corresponding features and advantages. These screenshots are basically the advertising posters of the app.” Take the Bejeweled result above, for example: “The Award-Winning Match 3 Puzzle Game!”

Google Play, on the other hand, emphasizes displaying a quantity of apps as opposed to deep-diving into one app at a time. This has the advantage of letting a user view multiple apps before they install, but it comes at the cost of screenshots and videos being displayed on the front page. Instead, icons, titles and short description take center stage. Similarly, while publisher name and user rating are displayed for each app, there is no “Get” button equivalent, as the users likely won’t have enough information from an app’s title and icon alone to warrant an installation. Instead, users have to click on the listing and go to the app’s Store page to discover more.

There’s one more big difference between Google and Apple, too – Google’s Sponsored apps. Like on Google’s web search results, their app store results come with a sponsored ad at the top of the list. This provides app developers with the potential to reach a much larger audience by jumping to the top of the list for their chosen terms, and the results might just be worth it. Each month, over 100 billion searches are made through Google Play. Being at the top for some of those searches could help your app to greatly expand its organic discovery prowess.

The differences in the ways that app stores display their search results manifest in different ways of optimizing for them. For example, your first screenshot is most important on iOS, because that image will show up in search results for all potential users. According to research, “apps that have…informative, relevant screenshots are more likely to be downloaded than those that are confusing or complicated.” Users like to be able to quickly pick up on the gist of your app from its screenshots.

Similarly, video is key on the App Store. If you upload a trailer with your game, it will display even before the first image, giving users a chance to see your game in action instantly. A good video and solid first screenshot can then compel users into clicking the “Get” button before they even open your app page.

With the App Store’s selection at 2.4 million apps and counting, and search being a primary method of discovery, it seems that Apple saw the need to provide room for merchandising on the search result view. If you’ve been following Apple since the first iPhone you may have noticed that their search results page has gone through several iterations, from displaying a simple listing with just the icon and title view (similar to what Google has now) to a more open space for apps to merchandise through video and screenshots. One can conclude that Apple is trying to reduce the decision making process into as few steps as possible, allowing users to view as much of the app and even download it from the search result view.

Apple’s focus on marketing from the search result view has one more notable side effect: It makes Google A/B testing unreliable. Users don’t need to click through onto your app’s page to download, meaning they may never see all of your app’s information and may never be exposed to the elements which you are trying to test.

Google also has a growing catalog of apps, with around 1.9 million. It seems that they have taken the approach of showing more apps in the search results to give users the ability to view a few apps at a time. This approach creates a two-step process for users, forcing them to click the app to view more. This means a user must be intrigued enough by an app’s icon, title and ratings to click through to the app page. Once on the app’s page, users can view video, screenshots and description, and ultimately download the app if all these factors speak to them.

This difference in approach means that an app’s title and icon must carry the weight during the initial search phase. A creative or polished icon coupled with an interesting title will have to be enough to make a user choose your app. Only then are the video and screenshots displayed.

It’s worth noting that Google does offer developers more room to include screenshots once a user has clicked through to the app’s page. Apple offers a maximum of five slots, while Google provides up to eight. Similarly, Apple restricts video to thirty seconds, but Google actually requires a video to be at least thirty seconds, and at maximum two minutes.

Google is also much more lenient in what they allow in a video preview. The Apple guidelines only allow “screen captures of the app, voice-overs, and textual and design overlays”, while Google uses YouTube videos for its previews. This means that as long as your content is age appropriate, Google lets you show users interacting with your app, promotional content that may not be featured directly in your app, and other offscreen functionality.

App developers should keep these differences in mind when submitting to each app marketplace. On the App Store, results weigh heavily upon the video and the first screenshot. On Google Play, the process is split into two steps. Users must first show interest in an app’s icon and title in order to be granted a deeper dive into the app’s video and screenshots. By keeping this information in mind, app developers can make targeted creative content to excel in both stores.

Can TV Marketers Relax? Cord Cutting Trend May Not Be That Bad
Next