Loyalty Card Overload – Veoo Has a Solution for That!

The following is a guest contributed post from Gillian Hughes, VP of Corporate Sales at Veoo.  Whilst perusing the Life & Style pages of a national daily newspaper this past weekend, my guilty pleasure, I came across an interesting column entitled ‘What’s Hot, What’s Not.’ Contained within was a list of reader highlights from the …   Read More 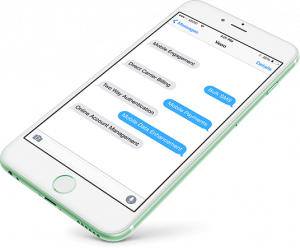 The following is a guest contributed post from Gillian Hughes, VP of Corporate Sales at Veoo.

Whilst perusing the Life & Style pages of a national daily newspaper this past weekend, my guilty pleasure, I came across an interesting column entitled ‘What’s Hot, What’s Not.’ Contained within was a list of reader highlights from the past seven days, juxtaposed with a choice selection of reader pains, the most notable of which was ‘Loyalty card overload – why hasn’t someone invented a decent simple app yet to put them all in one place digitally?’

Good question, I thought. I have read countless articles voicing the cries of derision from exasperated consumers who are at their wits’ end with the thought of trying to cram yet more plastic loyalty cards into an already overstretched wallet; or, worse still, the paper coupons which always seem to be buried at the bottom of the oversized bag belonging to the consumer one space ahead of you in the supermarket queue.

The fact of the matter is that consumers want, and are beginning to demand, fully integrated loyalty and discount programs linked directly to their mobile devices. It just makes sense. With 80% of UK adults now owning a smartphone and the average user having 42 apps installed, 10 of which are used every single day, the digital revolution has encompassed almost every sinew of everyday business and consumer life. In fact, the exponential growth of mobile and the plethora of mobile apps that are revolutionizing the way in which consumers can pay for goods and services has led numerous industry insiders, such as ourselves at Veoo, to proclaim the almost imminent redundancy of the once seemly essential physical wallet. However, despite this development, many retailers and supermarkets are yet to shed the shackles of reluctance and traverse into the 21st century with a fully digital-first approach to loyalty cards.

Fundamentally, it’s about retailers understanding that the way in which consumers want to make purchases today has changed. The arrival of SMAC (social, mobile, analytics and cloud) technologies has set in motion a chain of events that has seen industries, formerly thought immune to digital upheaval, now needing to adapt their strategies to incorporate a digital-first approach. With the continued rise in prevalence of mobile devices, surely a smartphone-accessible loyalty program would expand the potential means by which a retailer could interact with customers and turn loyalty programs into a tangible driver of sales, whilst also enhancing the shopping experience. This again raises the question as to why so few retailers have adapted to offer more smartphone-based loyalty programs.

It’s fair to say that it’s not the entire retail industry that is totally blinkered to the idea of a digital future for loyalty schemes. In fact, it was Harvey Nichols that first recognised the rising power of digital and mobile at the expense of traditional plastic cards, when launching a loyalty scheme exclusively as a mobile app in 2015. Its head of digital marketing, Kerem Atasoy, was on record as saying that the launch was based on research that showed 80% of customers preferred a mobile app to a plastic card.

Moreover, a recent study I read from Juniper Research showed that more than 3 billion loyalty cards will operate as mobile-only or be integrated into mobile apps by 2020, up from 1.4 billion last year. The new research, ‘Mobile & Online Coupons: Redemption, Loyalty & Consumer Engagement 2015-2020,’ indicated that brands and retailers are becoming increasingly respondent to consumer demands for mobile integration.

However, the key solution that retailers now need to provide their customers with, in order to alleviate the pains I referred to at the outset of this piece, is a dedicated digital wallet for all loyalty cards to be stored within and that’s where Veoo’s Mobile Wallet comes into play.

Guaranteed to disrupt the mobile payments industry, the solution not only enables consumers to pay for items, but also enables customers to create mobile vouchers, offers, loyalty cards and event invitations that are stored in their mobile phone. The Mobile Wallet will also reshape the way brands interact with their customers, allowing notifications to be sent to anyone who has downloaded a voucher/ticket when they come within 100m of an applicable store, as well as facilitating push notifications, which can be sent directly to customers at their discretion.

The Veoo Mobile Wallet’s most endearing feature, and potentially biggest industry differentiator, however, may be the fact that consumers don’t need to download yet another app to take advantage of the solutions benefits. On the contrary, Veoo’s solution allows brands to leverage the mobile wallet that is already, by default, installed on every iOS and Android device. Consumers, therefore are not required to install anything, they simply save the voucher when it appears on their handset which then gets put into the smartphone’s default mobile wallet for easy redemption in-store.

Providing a mobile solution to the loyalty card conundrum will give a myriad of benefits. For the consumer, there is the increased convenience and simplicity of no longer having to carry physical cards, real time points and balance updates and location aware notifications. For the retailer, digital coupons will give improved targeting and personalization, leading to greater activity rates, thereby resolving a key failing of traditional schemes where the lack of relevant offers often resulted in a downturn in usage.

So consumers and retailers alike can rejoice, the age of the digital loyalty card is upon us.