Infographic: As Brands Dive Into Stickers Here is Where Consumers are Sharing on Mobile

The following is a guest contributed post by Robert Ferrari of Bare Tree Media There is little doubt that stickers are having a moment. In 2016 more than 6 billion stickers or emojis were sent every day on mobile messaging apps. Stickers are even the...

There is little doubt that stickers are having a moment. In 2016 more than 6 billion stickers or emojis were sent every day on mobile messaging apps. Stickers are even the theme of Apple’s latest advertising campaign that is aptly titled “Sticker Fight”.

Brands aren’t shying away from participating in the emoji and sticker ‘fight’ either. There was a 609% year-over-year growth of branded campaigns using emojis between June 2015 and June 2016 according to research by AppBoy. During that time over 800 million branded emoji messages were sent.

Where are consumers sharing these stickers on mobile devices? Along with the latest advertisement, Apple finally planted a foot in the ‘messaging war’ last September with the launch of iOS 10 and an iMessage-specific app store. The move solidified iMessage as a standalone messaging platform in a battle with Snapchat, Facebook Messenger, WhatsApp and even Instagram for the way we increasingly communicate through visual representations. Namely, emojis and stickers.

Is Apple’s emphasis on marketing its iMessage App Store paying off in winning sticker share? Our team at Bare Tree Media recently analyzed more than 8 million stickers shared over the last six months on our platform to find out. 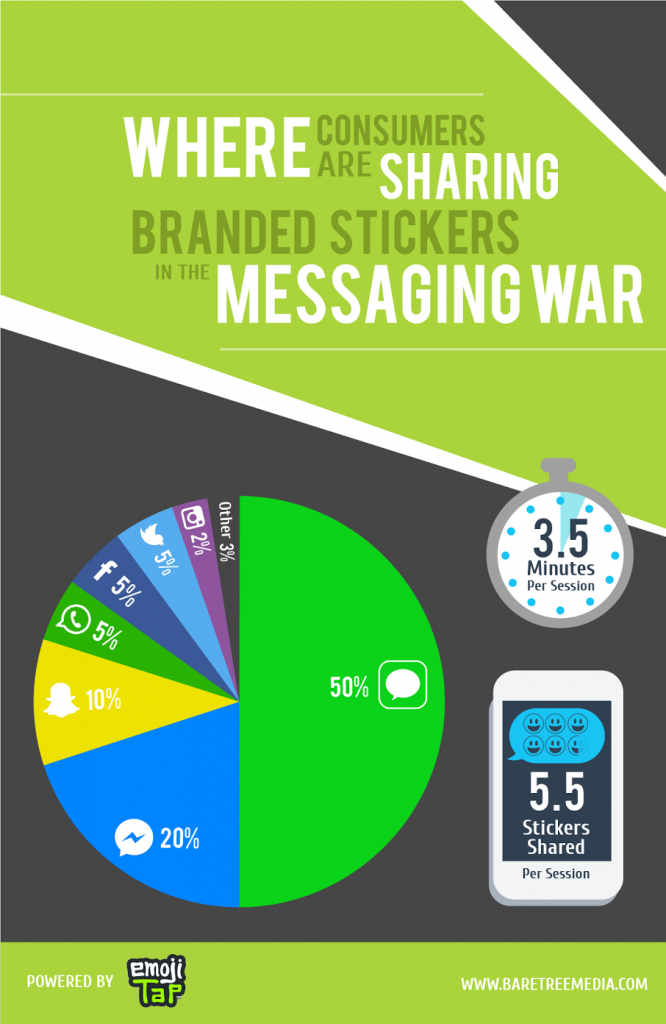 iMessage Dominates in the U.S. with Branded Sticker Sharing as Consumers Stick  to One-to-One Messaging

As you can see from the infographic above, when it comes to branded sticker sharing in the U.S. – consumers are sticking with iMessage. Of the 8 million branded stickers we analyzed, just over 50% or 4 million were shared on iMessage. The next closest was Facebook Messenger with 20% of the shared branded sticker market.

Furthermore, we also looked at the engagement level that consumers have with branded stickers and sticker features on branded apps. While session lengths for fully coded apps hover around 4.8 minutes per session — engagement with branded sticker packs and app sticker add-ons came in at a very respectable 3.5 minutes spent per session. This is heavy brand engagement being achieved without coding or heavy technical budget allocations.

Stickers are also driving the usage of messaging apps. Users of stickers on Bare Tree Media’s platform sent 5.5 stickers per session. As Apple looks to grow beyond its 200K iMessages sent per second — stickers could be another driver of user engagement.

The Future of Branded Stickers is Photo and eCommerce Integration

Photos may have an increasing role as brands look to further capitalize on the momentum behind stickers with mobile customers.

As part of our research, we also found that consumers are using photo and sticker integration functions 20% of the time. Furthermore, brands such as Life is Good and MuscleTech, which have started creating stickers with the intention of them being included in photos, grew usage of branded stickers by their users by close to 40%.

Snapchat originally introduced the idea of putting stickers and filters on top of photos, but the rest of the messaging and social network platforms have been quick to jump on the bandwagon. Even Tumblr and Twitter have added sticker integration.

While branded lenses or stickers on photos can cost as much as $450,000 on Snapchat, brands like Life is Good are figuring out how to give consumers the option of “brand tagging” their photos via their own branded apps. The result is consumers sharing branded content on public social networks versus one-to-one messaging apps. In addition the user-generated brand content can be used across company websites and all types of branded platforms.

Looking further into the future, we’ll likely see stickers not only tying back to branded apps but also integrating with eCommerce destinations. Domino’s probably implemented the best-known commerce tie-in to date with stickers and emojis. Customers that created a “Pizza Profile” on Dominos.com could opt into “easy ordering” by sending a pizza emoji on Twitter or by text to the Dominos number. However, in the future, stickers could also tie directly back to specific product pages within mobile commerce stores or even reemphasize product placements on TV or in movies.

For instance, we’ve worked with FOX in the past to design branded stickers for its highly watched television drama Empire. FOX wanted to promote the premiere of season 2 which character specific and even episodic stickers. As part of the campaign, 500,000 Empire stickers were shared on the messaging app Kik.

Now imagine if we had created some sort of episodic stickers to promote Pepsi’s product placement within the show. A sticker of a refreshing Pepsi in the hand of Jamal? That sticker could also link back to Pepsi.com or Fox’s Empire website to enter into a giveaway or to see behind the scene footage from the show.

From television to the phone in your hand to a commerce destination — stickers could become a driver in facilitating and encouraging the mobile buyer’s journey in the digital age.

Robert Ferrari is the founder and CEO of Bare Tree Media, which specializes in helping brands reach, engage and market to their fans across mobile messaging platforms.

Mobile Security News : How Not to Get a Virus
Next