Holiday Email is Hotter Than Ever

A new Experian report verifies that “Cyber Monday” still rules as the top email volume and transaction day. In 2015, 90 percent of those emails included an offer. Experian Marketing Services, a well known leader in data-driven marketing and cloud-based marketing technology, also documented an increase in email volume year-over-year. Details are contained in its …   Read More 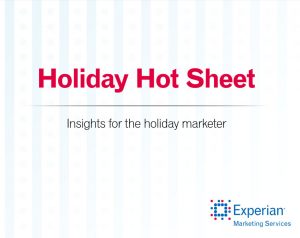 A new Experian report verifies that “Cyber Monday” still rules as the top email volume and transaction day. In 2015, 90 percent of those emails included an offer.

The report “indicates that email volume rose 24.8 percent during the 2015 holiday season compared to 2014, across all-industry verticals,” according to a news release shared with MMW. “Despite the increase in volume, the number of email opens, clicks, and transactions also increased. Unique email opens increased 19 percent, unique email clicks increased 10 percent, and email transactions increased 20 percent.”

“As retailers find more ways to incorporate data to create more personalized and relevant emails, we are seeing both volume and transactions increase,” said Spencer Kollas, vice president of global deliverability services at Experian Marketing Services. “The 2015 holiday season showed us once again that marketers are still finding email to be a valuable way to increase sales.”

The report includes findings on other key marketing trends from the 2015 holiday season —free shipping being one of them.

“According to Experian’s analysis, 90 percent of retail email campaigns during the 2015 holiday season included an offer, free shipping was the most common, followed by percent off,” the report authors note. “The percent-off email offers featuring coupons or codes increased from 34 percent to 40 percent in 2015, allowing more tracking of responses.”

And mobile definitely made its mark.

Email clicks via mobile on a missive from a retailer increased 7 percent from 2014. SMS messaging continued to be critical.

Mobile Marketers Lighting Up Mobile Commerce Across the Pond
Previous