He Sees You When You’re Sleeping, He Knows When You’re Awake: It’s Not Santa, It’s an Advertiser

The new wearables — including the soon to be mass released Apple Watch — could cause a veritable revolution. The revolution in advertising is a given. Advertisers are already working on ways to commandeer the smartwatch screen. But there could be a revolution staged by consumers, if things don’t go well. Because when people sing …   Read More 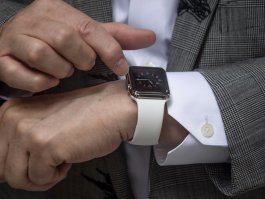 The new wearables — including the soon to be mass released Apple Watch — could cause a veritable revolution. The revolution in advertising is a given. Advertisers are already working on ways to commandeer the smartwatch screen.

But there could be a revolution staged by consumers, if things don’t go well. Because when people sing “He sees you when you’re sleeping, he knows when you’re awake” next holiday, you’ll have to ask whether they’re talking about Nike or Coca-Cola or Santa Claus.

There’s an excellent recap of what’s happening in this arena by Olga Kharif at Bloomberg.com — and it’s a must-read.

“In the past few months, about 15,000 people using the Golfshot app on their Android-based smartwatches saw a message take over the screen for five seconds. It started with sponsored by. Its among the first wearable ads to go live, and in the future, no product with a Web-connected screen will be safe, from home coffee makers to cars,” says Kharif.

That sentiment is echoed by Frank Addante, CEO at Rubicon Project.

Weve looked at things like wearables, digital advertisements on faucets, appliances — anything that can have advertising on it, Addante has said.

Consider this: Juniper Research projects that revenue from ads that run just on smartwatches could surge to $68.6 million by 2019. That’s up from the comparatively paltry $1.5 million this year.

“Smartwatches let advertisers grab consumers attention immediately, no matter what they are doing,” writes Kharif. “And its not just about screen space. Extra sensors that collect data such as the pulse, movements, and even skin temperature could help marketers better target their ads.”

Kharif quotes Greg Ratner, which gets us back to the crux of the matter — as well as back to that Santa Claus thing.

Is this person awake? Is that a good time to interact with that user at all, or should we wait for a different time to engage with them? All that is just additional context to help us connect the brands with the users at the right moment,” opines Ratner.

It’s becoming more and more apparent that people don’t gravitate to advertising; instead, advertisers are intent on coming to them. And at all the right trackable moments.

“Making sure that consumers dont find the ads annoying — or creepy — will be a challenge,” notes Kharif. “Thats why many marketers are leaning toward sponsoring useful functions, such as telling users Have a great run! when theyre using a running app or reminding them their most recent score in a game.”

But it’s a dangerous and mixed bag for marketers.

And talk about privacy concerns — especially vis a vis wearables. There are plenty.

Consequently, the future remains to be seen. As Kharif points out, these are the same kinds of concerns raised about mobile advertising — before it became a multi-billion dollar global behemoth.

Just remember: your watch (and maybe soon your coffee pot and garage door opener) will know if you’ve been bad or good. So be good, for goodness sake.