Bloomberg Media announced this week the formation of BloombergQuint, a new partnership in India with Quintillion Media, India’s digital news venture founded by serial entrepreneur Raghav Bahl. The partnership, according to a news release, will cover broadcast, digital and live events across India, serving business and financial news to one of the fastest-growing economies in …   Read More 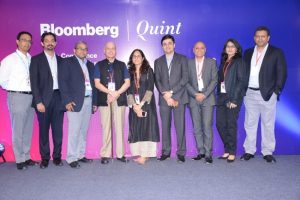 The partnership, according to a news release, will cover broadcast, digital and live events across India, serving business and financial news to one of the fastest-growing economies in the world.

“At Bloomberg, we’ve set out to build the leading multi-platform global business and financial media company. Currently, almost half of our digital traffic comes from outside the United States and this figure continues to grow. Partnering with Quintillion Media in India is a game-changer for the country’s digital and broadcast media industries, and for Bloomberg Media globally as we take our investment to an exciting new phase,” said Justin B. Smith, Chief Executive Officer, Bloomberg Media. “It was clear when we met with Raghav that we shared a common vision to create India’s premier digitally-led multi-platform business media company.”

Raghav Bahl, founder of Quintillion Media, said, “The combination of Bloomberg Media with Quintillion Media is a powerful one. It will bring a completely new brand of journalism and media experience to India’s increasingly sophisticated business consumer. We will deliver content via technology in a digital-first model that will redefine this space.”